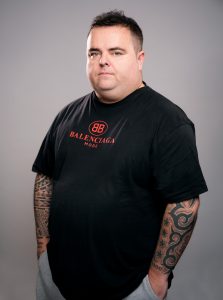 Craig Campbell, a leading online entrepreneur and SEO expert with his own agency, has manage to land multiple acting roles in recent months as a result of his admirable reaction to online trolls.

Craig’s new acting adventure began when David Wilde, director of the Crime Lord series filmed in Glasgow, spotted him online and asked him if he would be interested in playing a part.

Crime Lord is a show focusing on Paul Black, who has turned to writing crime stories after serving fifteen years in prison for bank robbery. On the surface it seems he’s doing well in his new career– he has a publisher and a lucrative movie deal. However, things soon take a turn for the worst and plans for a crime-free life fly out the window. It seems Paul Black might have to become a part-time crime writer, full-time criminal.

Craig was more than happy to take on the role of Johnny Dallas in the series, a tech expert who gets tangled up in Paul Black’s world. Craig has loved getting involved with the series, and he’s received a great response from viewers about his performance so far.

Turning trolling into a positive

Online trolls have always been lurking in shady areas of the web, feeding on causing drama and misery to others online. Their motives seem to vary, from acting purely because of personal grudges, to desperately seeking attention, to speaking out of jealousy – and countless more motives besides.

High-profile figures like Craig Campbell regularly get trolled due to jealousy. Craig’s large social media following combined with the fact he regularly speaks at events he does as part of running his day-to-day SEO business.

Craig often addresses trolling on his accounts in positive ways. He encourages his followers to ignore online trolls and instead invest their time and energy on doing positive things and working towards making their dreams a reality. He truly believes this is the best way to discourage any doubts and negativity and welcome positivity and opportunity into your life.

It’s perhaps little surprise that Craig has turned to acting as a response to online trolling – the SEO star has actually dabbled on the stage before! He has previously appeared in some UK soaps over the years, such as River City and Hollyoaks.

It seems Craig’s acting journey is far from over, too… Since landing the part of Johnny Dallas on Crime Lord, Craig has been signed up by an acting agency in London and had numerous acting offers for other Netflix series that are in the works. It just goes to show that good things can come from negatives – from being trolled online to having a promising side career as an actor!

SEO services to suit you

As well as dabbling in acting, Craig is an experienced, respected SEO expert and owner of Craig Campbell SEO, a digital marketing company that specialises in link building, online reputation management, and PPC management.

Craig has also been named the highest-paid Scottish businessman on YouTube after landing an impressive six-figure sponsorship deal with ODYS Global.

Through his business, Craig also offers SEO training courses and a variety of other services tailored to suit your business needs, such as digital marketing, social media marketing, lead generation, advertising and much more.

His popular virtual marketing course on YouTube has helped hundreds of people to launch their own successful businesses. Because Craig believes in giving back to his community, he offers this popular course for free so that money will never be an obstacle to people wanting him to educate them on how to improve their rankings on Google.

Head on over to his website today to find out what he can do to help your business thrive!

Craig Campbell, founder of Craig Campbell SEO, is a respected SEO consultant and educator who regularly speaks at digital marketing conferences all over the world.

For more information, please head to the website at www.craigcampbellseo.com to browse his range of services. If you have an inquiry, please email [email protected] or call 07397 850 511.

My name is Craig Campbell and I am a Glasgow based SEO expert who has been doing SEO for 18 years. In this time I have gained extensive knowledge in the subject of SEO and have built up a wealth of…